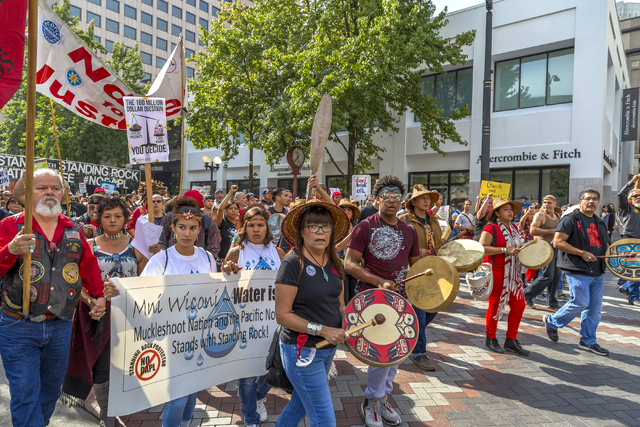 We gathered for Thanksgiving last week with friends up in Seattle. I look forward to Thanksgiving, it is one holiday which I do not need to work for one, and can spend with my wife and kids. Since our extended families are distant, we have more often than not spent it with friends, and I enjoy the opportunity to meet new people and renew past relationships. I love the food, and the civic focus on gratitude is an important injection of spiritual values into our “secular society.” This year our host handed out copies of the Constitution, further opportunity for reflection on where we have been and were we are going as a country, especially after this last election.

Where we have been is an important question on Thanksgiving, because we know from the history of this country the holiday is not celebrated by all. While we tend to tell a story of friendship and cooperation, we know the real history of the colonists and the Native population was devastating, including conquest and genocide.

I wrote a few years ago (On Thankgivukkah!) how our modern Thanksgiving is rooted in the Civil War as well, as it only became a fixed national holiday in Lincoln’s time. The idea was unity at a time of disunity, and Lincoln’s proclamation is a noble document. And while we can strive for its aims, we can not do so outside the historical context in which the “original” Thanksgiving and the “modern” Thanksgiving are based. (Lincoln also was responsible for one of the largest mass executions in US history, of Native Americans.)

And Thanksgiving comes just a few weeks after that other traditional pastime, the Major League Baseball World Series, which pitted the Chicago Cubs versus the Cleveland Indians, which is another term I prefer not to use but use it here for the point of illustration. Another major league sports team, another problematic name. Plus the Cleveland baseball team has a racist mascot, a caricature of a Native American elder.

In America, we compound the painful history by reducing Native Americans to stereotypes, mascots and caricatures.

This is made all the more tragic, or ludicrous, our sad because currently there are Native populations staging an active and major protest in North Dakota. The Standing Rock Sioux are are protesting the construction of an oil pipeline that would be built on their historic land near their reservation and under the Missouri River, which serves as the source of their drinking water. A leak could be devastating to the Sioux and the environment.

The protests are augmented by the knowledge that the original path of the pipeline was to be closer to the city of Bismark, which would still need to go under the Missouri River, but complaints by the population about potential leaks there prompted the moving of the pipeline. This just the latest in a long history of the US Government and business interests slowly eroding or outright disregarding the agreements with and the rights and lands of Native Americans, and the reaction by authorities has resonant historical echoes.

While this was happening, this week out of Russia was the obscene news that the wife of a Russian official participated in a ice skating routine to a Holocaust theme. Dressed in concentration camp uniforms complete with yellow star, the skaters danced on a reality television show to the theme to the Holocaust movie, “Life is Beautiful.”

I felt a strong sense of parallelism.  A culture once thriving, then driven almost completely out of existence through genocide, now pantomimed in a way that mimics and distorts reality. The connection between the approach to Jews in Europe and Native Americans in the United States was noticeable in this instance: Jews in Europe have, like the Native Americans here, been reduced to mascots.

Which is why the protests at Standing Rock deserve our attention and support.

Our Jewish history is a history of displacement and being driven from our homes. We may have grown comfortable in our position in this country, but our  history is in our DNA. And with the rise of this new government, we Jews are being reminded more and more how we should not be as comfortable as we are. Threatened and oppressed populations require our support.

But not only that. The Standing Rock Sioux deserve our attention and support because they are bringing to the forefront issues which we should all care about: protection of our earth, protection of our water, our dependence on fossil fuels and the need to respect all peoples. That and the reckoning of the sins that built this country and their perpetuation in how the Native population is treated today. We all need to sit up and take notice.

Rabbi Rachel Kahn-Troster, Director of Programs for T’ruah: The Rabbinic Call for Human Rights, said it so well in a letter to supporters this week when she tied the situation to the weekly Torah portion. She wrote,

In this week’s parshah, Toldot, we read about how the Phillistines blocked up the wells Abraham had dug, forcing Isaac to redig them in search of Rechovot–wide open spaces where he could live in peace. The Native American water protectors are standing up not just for their own protection but for all of us who want clean water, sacred sites, and human rights protected from corporate greed.

Our spiritual history and actual history and values compel us to take a stand. We all deserve the protection of those things that are most precious to us, things like water, and respect, and peace.