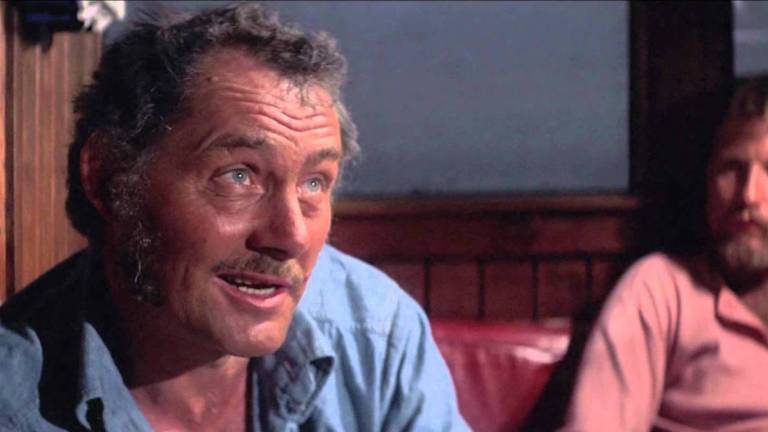 Just before Passover, I got my first shot. And it felt like a liberation.

Anxiously waiting for vaccine distribution to speed up, I was contacted by someone I know who was working at a distribution site in Shelton. Appointments were unfilled, she asked, would I like one? So on Friday afternoon I drove up 101 and got my first dose.

Ok, weird segue to a movie reference. I have recently been thinking about the movie Jaws, one of my favorites. And I like it not so much for the shark feeding frenzy in the beginning, but for the second half when Brody, the fish-out-of-water urban police chief; Hooper, the young marine biologist; and Quint, the gruff and seasoned fisherman head out on Quint’s boat to hunt the shark.

During that time, in a beautiful monologue, Quint (played by Robert Shaw) tells how he survived the sinking of the USS Indianapolis during World War II. His fictional tale was based on a true event, when the ship that delivered the bomb that was dropped on Hiroshima was sunk after its secret mission. Many of the sailors were killed by sharks while they waited to be rescued.

During that monologue, describing the rescue effort, he says, “That was the time I was most frightened, waiting for my turn.”

Random, I know. But I had been thinking of that scene as the vaccine’s began to roll out. Watching vaccine selfie after vaccine selfie–especially of rabbi colleagues in other states–made me feel both happy for them and a bit envious. Having survived this long avoiding the virus, waiting for my turn for a needle in the arm, I thought about what Quint must have felt like waiting for his turn at rescue while the danger still swarmed around him, being so close to safety but at the moment still at risk. I too wanted that sense of relief felt by others.

So when it came, I have to admit I was overcome by emotion. A rush of relief fell over me as tears welled up in my eyes, grateful for all it took and for all the people who contributed to that moment, up to the health care provider who administered my dose.

There were flaws in the rollout across the country, as we know, due to limited supply and increased need, due to difficulties finding appointments, access to technology, and others. Some places were oversubscribed, and others undersubscribed (with the risk of letting doses go to waste). A few days after my first dose Governor Inslee opened up eligibility to everyone beginning April 15, and so we can hope that everyone will be able to get their vaccine in the coming weeks.

And so may it be soon that everyone is able to have the sense of relief and safety from this pandemic. The timing for me was coincidental but serendipitous–Passover is a time when we celebrate an ancient story of freedom from captivity, of moving from a place of confinement and restriction (the Hebrew word for Egypt–mitzrayim–is related to narrow–tzar) to a place of expanse. And it truly feels that we are slowly, each in turn, coming out of our difficult season to a hopeful new reality.

As the vaccines began to rollout, a discussion emerged among my colleagues as to what might be the most appropriate blessing to recite upon receiving the shot. The shehecheyanu was offered of course, it is always appropriate to offer this blessing for new experiences. Another suggested was the general blessing for good times and experiences, a prayer that acknowledges God as hatov vehametiv–the One who is good and creates good. And still another thought is a blessing that acknowledges the divine as the source of healing–rofe kol basar u’mafli la’asot–the one who heals all flesh and performs wonders. All great suggestions.

At the time of my first dose I was too overcome to offer a blessing, but perhaps the second dose would be the correct time anyway as I will be fully vaccinated at that time. And for me, the one that comes to my mind as the right one to say comes from the morning liturgy, and draws on these themes of Passover, of rescue, of emerging from our own narrow place:

Blessed are You, Adonai, Our God, Sovereign of all Space and Time, who frees the captive.

2 thoughts on “Emerging from our Narrow Places”

Kashrut. Irrational and meaningful.
This was no boating accident
Enjoy your chametz! Don’t forget the liberation!