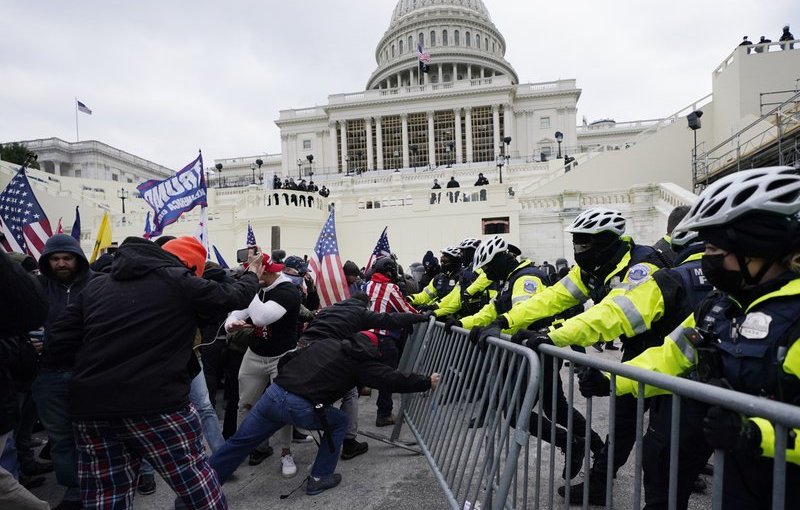 I’m glued to the news today, watching as the Trump presidency ends as it began: with lies and hate. Spurred on by the false narrative of a stolen election, supporters of the President have violently stormed the Capitol in Washington, DC. A day that was supposed to be one of formality and banality in the life of our democracy–the reading and recording of the Electoral College ballots–has become one that has threatened the very nature of that democracy.

This is something that has been building from day one, when President Trump began his presidency with words of hate against immigrants and policies like the Muslim Ban, and the introduction of the terms “alternative facts” and “fake news.” The hatred and lies has culminated in violence.

I know that in our communities there exist differences in preferred policy and legislation. But what we are seeing today goes way beyond differences of opinion. What we are seeing today is akin to insurrection, a coup, a violation of the norms of a civil society and good government. An upending of the mores that we all expect and agree to in order to live in peaceful community.

As Jews and as Americans we appreciate the right to protest and express our views and opinions. As a religious minority we benefit from the protections of the First Amendment. But as Jews we also know the threat of mob violence, especially when it is spurred on by state actors. The pro-Trump rioters that we are witnessing today represent not a political party or preferred candidate, but an ideology of white supremacy that views Jews as the other and the enemy. It is a straight line from the “Jews will not replace us” chant in Charlottesville to the casual use of the term “globalist” and hijacking of Christian symbols more recently, and as Jews we should be aware for ourselves and for the other victims of this hate. (This was compounded today by the fact that had the protestors not been white, the police response probably would have been different.)

In an ironic confluence, on this same day we have learned that the two new Senators from Georgia will be the Rev. Raphael Warnock, an African-American minister and successor to the Rev. Dr. Martin Luther King, Jr., and Jon Ossoff, a white Jew and son of an immigrant. Both defeated incumbents in a sign less about party specifically, but about the nature of the America we wish to build–a diverse, more representative America in which all voices, especially formally silenced ones, are heard. For all of Trump’s lies about the outcome of the election, the American electorate has handed him and his enablers an overwhelming defeat. We hope that the mob represents the past, and this new government, the future.

As the Trump presidency comes to an end, I am finding there is so much about him and his tenure that was harmful: The policy of child separation at the border was inhumane and reprehensible, compounded by the poor execution that has prevented reunification. The attack on the environment and the rolling back of regulations that sacrificed long term stewardship for short term gain. The intentional ignorance about the pandemic and the failure to manage its spread led to much suffering and death. The assault on the health care system. The personal profiteering off of the trust of the American people. The general support of violence and hateful ideology. The egocentrism, lack of humility and inability to demonstrate compassion and empathy. And the name calling, bullying and insults (which for me–as someone who had been bullied and called names–raised in me the most visceral reaction.)

Add these up and more and you have what is for me the worst outcome of the Trump presidency: he caused me to hate another person. For me, who tries to judge people favorably and see the good in all, and who like to think I can connect with anyone, even those with whom I disagree, this feeling of hatred is anathema.

In this week’s Torah portion, we begin reading the Book of Exodus, which begins the story of the enslavement and liberation of the Israelites. The story opens with the death of the Pharaoh, and the ascension of the new Pharaoh. This new Pharaoh, the text says, “did not know Joseph,” meaning he either did not know or willingly ignored the history of Joseph and the Israelites and the contribution to Egypt. Instead, this new Pharaoh says, “Look, the Israelite people are much too numerous for us. Let us deal shrewdly with them, so that they may not increase; otherwise in the event of war they may join our enemies in fighting against us and rise from the ground.” (Exodus 1:9-10) As a result of this fearmongering and exaggeration, the Egyptians turn against the Israelites and enslave them.

But we know the end of the story. The demagogue is eventually defeated through the persistent work of Moses and the people. His fearmongering, while resulting in suffering, only has temporary effect. His willful ignorance of the past and his lack of empathy for his people leads to his downfall.

And just as the Torah teaches that the effects of Egyptian bondage took decades of the Israelites wandering in the desert to put behind them, the effects of the past four years will not go away easily. Yes, policies can be changed and laws can be passed, but there is a deeper spiritual healing that will need to come. And for that, we all have work to do. We can start right here and right now by honoring diverse voices, providing for those in need, protecting those who are oppressed and victimized, tending to the earth. We can remember that everyone is created in the image of God, no one person is better than another, and that everyone is worthy of dignity, respect, love and compassion. We can learn to listen as often as we speak, and we can work on developing our own sense of empathy and humility, melting the hate in our heart and loving those who would love us back.

Exodus teaches that hatred and hardship can and will come, but so does liberation and healing.

2 thoughts on “Hatred and Healing: On Today’s Events at the United States Capitol”