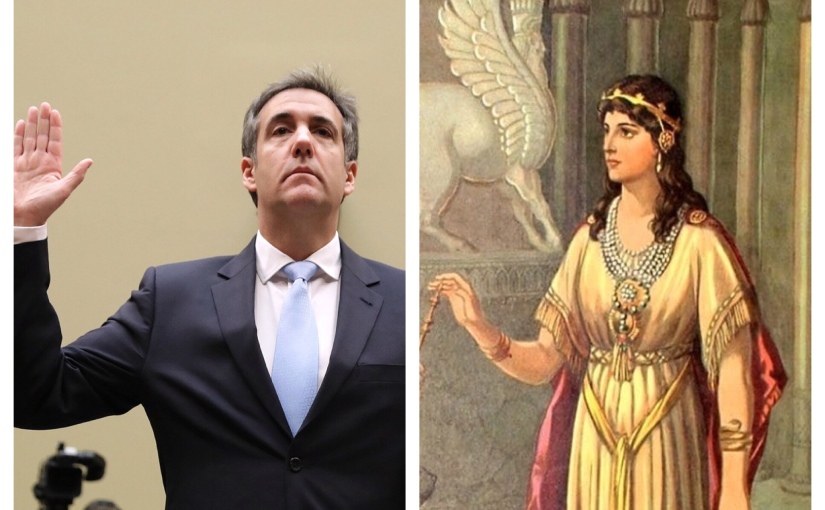 In the coming week we will welcome in the month of Adar II, and with it the holiday of Purim.

Purim is a frivolous holiday that hides a dark message. We dress up in costume, have fun, give gifts, tell jokes, eat and drink, and make a lot of noise at the same time we tell a story of a near-genocide of the Jewish people that is narrowly averted by a fickle king and a Jewish woman with access who speaks truth to power.

Indeed, it is because of the darkness of the story that we are so focused on having fun. We celebrate life itself because life can be so precarious. We celebrate a near-genocide because it is exactly that, a NEAR-genocide, and a reminder that life and history can change at an instant. We actively give up control because we know we have already given up control: to greater powers, both political and spiritual.

The center of the story is Esther, who after a misogynist pageant is installed as the queen. She is Jewish, but she hides this fact–her Hebrew name is Hadassah, we are told–in order to fit in to the court society. Her Judaism is not a factor in her day to day life, so she doesn’t talk about it in order to be well connected with those in power.

Circumstance, however, tips her hand when she learns that the king’s counselor Haman is plotting to kill the Jews of Persia. He convinces the king to issue a decree against the Jews, and when it is pronounced, the Jewish community goes into mourning. Esther’s cousin Mordechai, who had originally counselled Esther to hide her identity, then makes the suggestion that she is in a position to reverse the decree by revealing that she is Jewish and pleading for her life and that of all the Jews.

Though she is hesitant, Mordechai convinces her, saying “perhaps you have attained your royal position for a time such as this.”

It was Esther’s position that gave her access, and it was her position that allowed her to be able to speak up when no one else would have been able to.

I thought of the Purim story as I watched the powerful testimony earlier this week of Michael Cohen, President Trump’s former personal lawyer, who revealed before Congress a litany of Trump’s unethical and illegal dealings, both as a private citizen, as a candidate, and as President. The testimony painted an ugly picture of a person who has already been known to do ugly things.

There were those who sought to impugn Cohen’s character since he is headed to prison for campaign finance violations and lying to Congress. It is hard not to be skeptical. Yet listening to him speak, both in his opening statement and answers to questions, he took full responsibility for his actions, believably expressed remorse and regret, and talked of the lessons of his Holocaust survivor father. He was enacting a from of teshuvah, or repentance.

Michael Cohen is a Jewish man with access who is speaks truth to power. He is a man who through circumstance found himself close to the center of power, and therefore is able, though presumably hesitant at first, to speak up in a way that no one else is able to.

So perhaps, Michael Cohen attained his position for a time such as this.

What were their true motivations? We don’t know. But they both saw a wrong that needed to be righted, and both had the position and opportunity to do so. Esther courted death at violating the sanctum of the king. Cohen courts further shame and disgrace by speaking publicly. But both made a difficult choice to do what they believe to be right to save a people.

Unlike Esther and Cohen, most of our actions do not take place on the national stage. But yet like them we continually find ourselves in similar positions, where we are uniquely positioned to make a difference, but first we need to make a choice: do we stay comfortable and silent, or do we risk vulnerability and speak up?