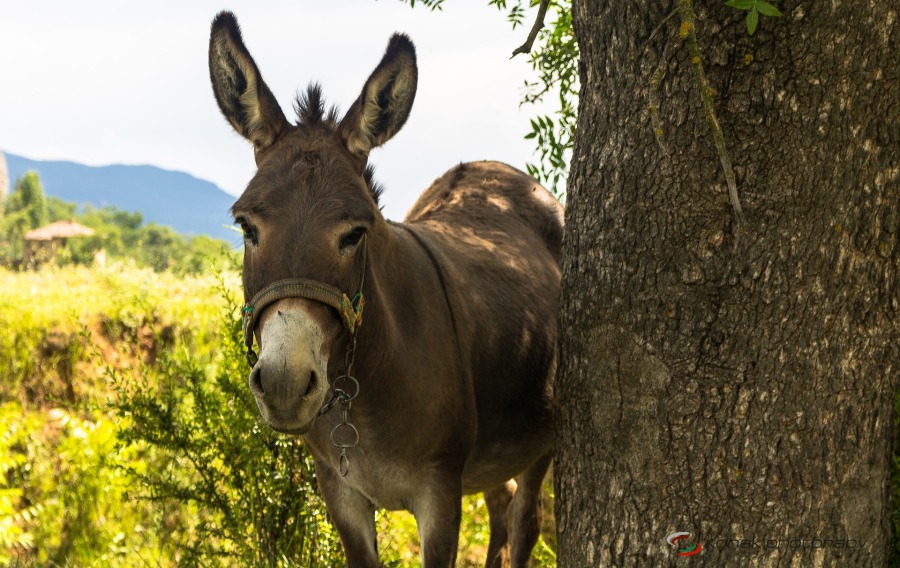 Parashat Balak is famous for the story of the talking donkey, only the second talking animal in the Torah. (The snake in the Garden of Eden, remember?) But we would be wise to not only note the fact of a talking donkey, but to listen to what it has to say.

God has other plans, however, and as Balaam is travelling on his donkey to carry out his task, sends an angel to block the way. We read in the text:

When he arose in the morning, Balaam saddled his ass and departed with the Moabite dignitaries. But God was incensed at his going; so an angel placed himself in his way as an adversary.

He was riding on his she-ass, with his two servants alongside, when the ass caught sight of the angel standing in the way, with his drawn sword in his hand. The ass swerved from the road and went into the fields; and Balaam beat the ass to turn her back onto the road. The angel then stationed himself in a lane between the vineyards, with a fence on either side. The ass, seeing the angel, pressed herself against the wall and squeezed Balaam’s foot against the wall; so he beat her again. Once more the angel moved forward and stationed himself on a spot so narrow that there was no room to swerve right or left. When the ass now saw the angel, she lay down under Balaam; and Balaam was furious and beat the ass with his stick.

Then God opened the ass’s mouth, and she said to Balaam, “What have I done to you that you have beaten me these three times?” Balaam said to the ass, “You have made a mockery of me! If I had a sword with me, I’d kill you.” The ass said to Balaam, “Look, I am the ass that you have been riding all along until this day! Have I been in the habit of doing thus to you?” And he answered, “No.”

Then God uncovered Balaam’s eyes, and he saw the angel of the Lord standing in the way, his drawn sword in his hand; thereupon he bowed right down to the ground. (Numbers 22:21-31)

When they were first riding, it was the donkey that was able to see the angel, Balaam did not. So when the donkey was seemingly just acting stubborn by first moving off the road, then pushing Balaam’s foot against the wall, then sitting down, Balaam reacted in a way that the evidence suggested he should act–he should hit the donkey to get it to do what he wanted.

But he was wrong.

And not because hitting an animal is a cruel thing to do (it is, but that is for another time), it was wrong because the circumstances actually required Balaam to act differently. When he hit the donkey, he did not have the whole picture. Based on his assessment of the situation, he acted in a way that was familiar, that was known, that may have worked in the past. But they didn’t work this time because the situation was different. Balaam’s old behaviors did not fit this new reality.

It was only after God opened Balaam’s eyes that he got the whole picture, and saw that this new circumstance and experience required a new course of action and a new way of being.

How often do we, when confronted with a challenge or an opportunity, simply fall back on what we know, or old habits, or what has worked in the past? Or as a community, or organization, or society, do we do things because “that’s how we’ve always done them.”

Balaam’s story tells us that what what worked then may not work now. New circumstances require new behaviors, new challenges require new solutions. When the donkey says, “I’m the donkey you have ridden all day, have I ever done this before?” it is an invitation to ask ourselves: do we have the whole picture? Am I just doing what I’ve always done? What am I not seeing in the moment? And how can I act in new and innovative ways to meet an unknown future?