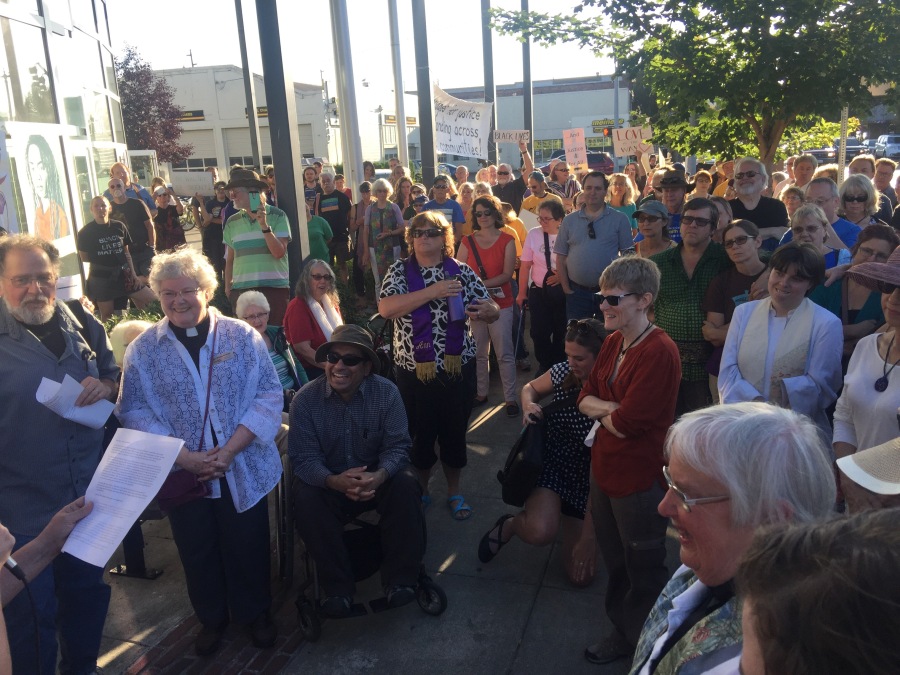 In the wake of the events in Charlottesville, in which white supremacists staged a rally filled with hate, replete with racist and anti-Semitic symbols and chants, a rally that turned violent and resulted in the death of a counter-demonstrator, I joined with other clergy to hold a vigil outside Olympia City Hall. Here are the words I shared, among many other powerful words shared that evening.

We stand here with heavy hearts after the events of this past weekend. And while we mourn the loss of life, and the hatred that caused it, we also stand here firm in our resolve to counter such hate with love.

We stand here to raise our voices of moral concern for the state of our society. When hatred such as that which was demonstrated in Charlottesville is allowed to go unchecked, when a politics based on fear and persecution is left unanswered, the damage can be devastating. We in the Jewish community know this all too well. We have seen this before in our lifetime. And we see it again now.

We condemn the overt hatred on display this past weekend, and we condemn the complacency and complicity that allowed it to take root, and fester, and grow.

227 years ago this month, shortly after this new country was formed. The organized Jewish community of Newport, RI, wrote a letter to the newly elected president George Washington. It was a letter of congratulations to the new leader, but the other message of the letter was darker—a Jewish community that had faced persecution and oppression for centuries, having been driven forcibly from its homes many times over, wanted to know if this new place, these United States, would be a safe haven, a sanctuary.

Washington wrote back, thanking the community for its well wishes on his presidency, and assured the community that Jews would be welcome, and equal, and benefit from the liberty promised to all.

In that letter he wrote these famous words, that the United States “gives to bigotry no sanction, to persecution no assistance.”

To bigotry, no sanction, to persecution no assistance.

We have, as we know, failed in our ability to fully realize these words. Indeed, we as a country, built on the backs and land of others, have much to atone for. At the same time, we have much to aspire to.

We must, now, more than ever, affirm these words and ideals. That we give, to bigotry, no sanction.

To racism, no sanction.

To anti-Semitism, no sanction.

To homophobia, no sanction.

To Islamophobia, no sanction.

To xenophobia, no sanction.

To all forms of oppression and persecution, no sanction.

And rather we strive to build a just community, that celebrates diversity and difference, that can affirm the spark of the divine in each and every human being, in which we do not harden our heart but rather open our hand.