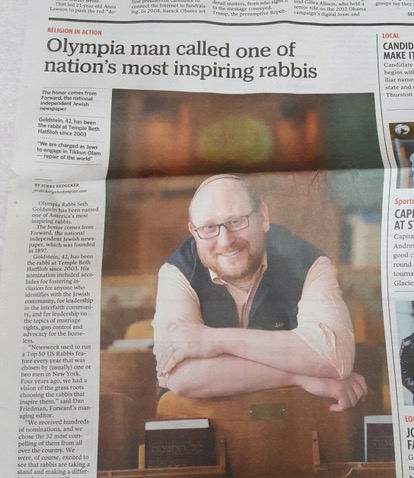 Earlier this week I had the distinct honor to be named one of America’s Most Inspiring Rabbis, by the national independent Jewish newspaper the Forward. The Forward, one of the oldest Jewish publications in the country, is so well respected that it was of particular note when I along with 31 of my colleagues from all across the country were recognized for our work in building Jewish community and bringing a Jewish voice to a wider audience.

It was only recently that I first heard I had been nominated, and that I should send in a photo in case I was selected. I found out about a week later that indeed I had been selected, and that the issue would come out this week. I then got a call from a reporter for the Olympian, who interviewed me and sent over a photographer to the Temple (they had been notified by the Forward). Then last Sunday, first through a posting on Facebook, I saw the actual article from the Forward. Two days later the Olympian article came out, and apparently it was part of the news on KPLU, though I didn’t hear it directly. (I still haven’t seen the print edition of the Forward as we get it at the Temple late via mail.) In the days following the article being published I’ve been awed by the number of congratulatory messages in my email inbox, or posted to Facebook, or texted or conveyed face to face. Quite a whirlwind.

The words in the Forward itself were penned by TBH member Craig Wallace, who had been the one who nominated me, a fact I didn’t learn until it was published. The Forward’s feature on inspirational rabbis is done from the bottom up, not the top down, and they make their annual selections based on nominations from the readership. This year they received over 130 nominations. Craig’s words were deeply moving to me and I am so grateful for his nomination.

As things are settling down I’ve had some time to reflect on the recognition, which is not about “the best” or “the top” or even—as Newsweek magazine had listed in years past—the “most influential.” It was “most inspiring.” It made me think about all the work that I do in my capacity as a community rabbi, now that I am drawing closer to my 13th (my bar mitzvah) year since ordination, and about how I strive to make a difference, to provide meaning, to inspire in ways large and small.

For those who come to Erev Shabbat services that I lead, we take the time to share images and moments of nature. One of the blessings in the liturgy is called “asher bidvaro“–“by whose word”–which focuses on nature, on the idea “Creation,” on the sanctity of the environment. We use this time in the service to silently reflect and then share out loud the times over the past week that we felt particularly moved by the power or beauty of nature. I use the word “inspiration,” in that the beauty and power and awesomeness of nature has the power to inspire and move us.

At the end of the sharing, I close with the same words each week: “Let’s hold on to those moments of inspiration, those spoken aloud or those spoken in our hearts, and as we move from this room this evening, let’s be open to be inspired, because there is so much out there to inspire us.”

The key to inspiration is being open to receiving it.

I feel so blessed to do the work that I do, the ability to serve my congregation and community, to represent Judaism and the Jewish community, to learn and teach, to laugh and cry, to build relationships and work for justice. But I could not do it were it not for the community that is willing and open to support me in that work and more importantly, be open to receive it.

In short, I could not do what I do if you didn’t do what you do. So, thank you. Thank you for all of your well wishes over this recognition. But more importantly, thank you for giving me the opportunity to serve.

And thank you for inspiring me. I try to approach every engagement as an opportunity for growth and development. I am continually learning from and being inspired by the people with whom I interact, and I know that has made me a better person, and a better rabbi.

I believe Judaism has a lot to offer: millennia of wisdom that can challenge us, transform us and, yes, inspire us. A chain of tradition and text that is so long and so enduring is powerful and not easily dismissed. We may wrestle with it, we may only turn to it at occasionally, we may walk away from it at times, but the key is to be open to it. To allow for the possibility that it can have some impact on us, even if (or, perhaps, especially if) we may not know in what capacity it will impact us.

As I continue to appreciate this honor (and I do), and as I continue to be humbled by it (and I am), I invite us to continue to cultivate a spirit of openness. It is in opening our hearts to one another, to received wisdom, to our own inner sense of self, that we are able to become holy beings.

And that ability to be open and to grow from that openness, is itself inspiring.