The blintzes are back!

This year, after a year’s hiatus Blintzapalooza returns. Blintzapalooza is one of Temple Beth Hatfiloh hallmark events, the Sunday in March when we open up our doors and welcome in the community to eat blintzes and bagels, buy used books, participate in a Jewish cooking contest and support local charitable organizations. It is a celebration of Jewish food and Jewish values.

I remember when I first came to TBH I was so impressed by Blintzapalooza not only because of the scale of the event, and all the work that went into pulling it off, but because it does a unique thing—it raises a lot of money, then gives it all away. At a time when all nonprofit organizations, synagogues included, recognize the precarious need to raise funds, Blintzapalooza allows TBH to raise money to support not itself, but other organizations. It is tzedakah (righteous giving); it is giving outward, not inward. 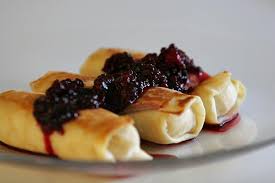 [And in case you missed it, Blintzapalooza is this Sunday, March 20 from 10-2. This year’s recipients are the Interfaith Works Emergency Overnight Shelter, South Sound Parent to Parent and ROOF Community Services Food Bank.]

In our weekly Torah reading we have completed the Book of Exodus and pick up the Book of Leviticus. The narrative of the Israelite journey in the wilderness takes a pause as we turn our attention to laws, ritual and practices. Some of those are compelling, some of those are repelling, but all included in our sacred text for us to wrestle with and engage (which makes Leviticus such and interesting book.)

The opening of Leviticus is introducing the sacrificial system. Prayer in biblical times, as it were, was carried out through an elaborate system of animal and grain sacrifices that would be administered by the priestly class in the sanctuary of the Tabernacle. If you had a desire, or needed to make atonement for sin, or wanted to express gratitude, you would bring an offering of the best of what you had to the Tabernacle where it would be offered up to God.

The Book of Exodus ends with the final construction of the Tabernacle, so the Torah is making a natural progression from the building of the sacred space to the functions of the sacred space. The building of the Tabernacle was a communal effort—the text describes the Israelites all donating their best wares (metals, fabrics, etc.) to its construction. It was an inward focused project which allowed the Israelite community to uplift itself by developing a unifying center. And now that it is built, they turn to donating their best wares (livestock, crops) to God, to that which is beyond them. Thus the Torah is also making a natural progression from giving inward to giving outward.

And when we give, we receive. From an organizational perspective the question could be raised about the wisdom in mounting a major fundraiser to solely benefit other organizations. But by giving we do benefit. Not only in the satisfaction we may feel in the act of giving itself, but since mutual responsibility and support is a Jewish value, by giving we develop deep relationships and good will among our neighbors that does benefit us over the long term.

The ancient Israelites offered their best to show their love and devotion to God, in exchange for being supported and cared for in return. When we offer our best, we show our love and devotion to others, and in exchange we too will be supported and cared for in return. The sacrificial system in Leviticus is reminding us that perhaps there is a cosmic sense of return on investment. We may not always see the tangible benefits of our acts of giving, but they are real and will be made manifest to us in time.