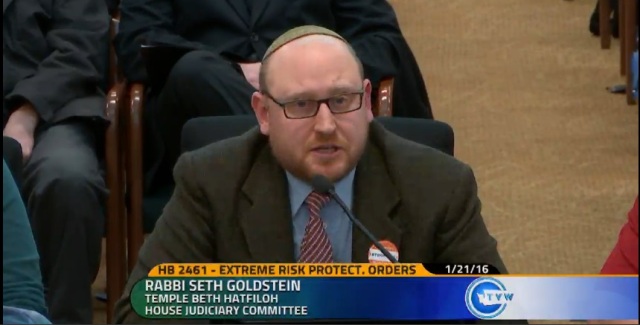 As the legislative session begins here in Washington, I had the first opportunity to offer testimony on pending legislation.

As part of my commitment to social justice, I find the opportunity to use the clergy voice to bear on legislation to be very important. Oftentimes to affect social change we need to work through our systems of governance and legislation, and to bring a moral and faith-based voice to bear on issues of common concern is part of pursuing tikkun olam. In doing this work, I generally work in coordination with two organizations, the Jewish Federation of Greater Seattle, the umbrella Jewish organization that develops a policy agenda does lobby, and the Faith Action Network, a statewide interfaith organization dedicated to issues of social justice.

The issue last Thursday was guns. And while I wasn’t originally scheduled to offer testimony, since the scheduled rabbi had a funeral to officiate, and I dutifully stepped in.

The bill was to establish Extreme Risk Protection Orders. These are court orders that will allow law enforcement to confiscate the guns of or prevent the purchase of guns by those deemed at high risk. If someone, for example, suffers from mental illness and is at risk of harming themselves or others, or has perpetrated domestic violence, or who has made obvious threats, then family members or law enforcement can petition the court to issue an extreme risk protection order. It is meant to get guns out of the hands of those most liable to do harm to themselves or others.

There were several gun related bills up for discussion that day in front of the House Judiciary Committee. Many people in support of the various gun safety measures shared personal stories of pain and loss related to gun violence. It was truly heartbreaking to hear, and served as a reminder that while we honor constitutional rights, we also note that rights must be tempered with responsibilities.

On the other side, the arguments against gun safety measures that I heard that day fell into a few categories: (1) there are other things that kill people and are liable to cause harm, and so why single out guns? (2) We don’t need new laws because there are enough protections on the books already. Or (3) there are other factors that contribute to gun violence, so we should address the root causes and not blame guns.

In other words, these bills being heard at the Legislature are not going to stop all gun related violence, so we shouldn’t even bother to implement them.

I think about this as last week’s hearing fell the week of the Torah portion Beshallach. This is the portion in which we read the story of the parting of the Red Sea, how the Israelites were finally free from Egypt, only to find their path blocked by the sea. With the Egyptian army pursuing them, Moses lifted up his staff and a miracle occurred, the sea parted allowing the Israelites to pass in safety.

The Midrash (ancient Torah commentary) adds more detail to the Torah text, and tells the story of Nachshon. As the midrash goes, when the Israelites saw the Egyptians approach and their path blocked, they cried out to Moses. Moses himself was unsure about what to do; there was arguing and discord. An Israelite leader named Nachshon, meanwhile, jumped right into the sea, and it was with that action that Moses was able to part the waters to let the Israelites pass.

It was Nachshon’s direct action and willingness to take a leap into an unknown future, the commentary tells us, that allowed for the seas to part to bring about liberation.

Nachshon’s example still speaks strongly to us today. Careful deliberation and weighing of options is important. But sometimes we just need to act, unsure about what the outcomes may be. The only surety is that doing nothing is not an option. In Nachshon’s case, doing nothing meant certain death, so he needed to take the first step forward.

As we continue to face the devastating issue of gun violence in our country, there are many ideas as to what measures we can take to reduce harm, and we can debate them all. But we also need to take action to do something. Doing nothing is not an option. It too, can mean certain death.

Here is my testimony:

Chair and members of the committee, my name is Rabbi Seth Goldstein and I serve the Jewish community here in Olympia, and I am here as a citizen and as a member of the clergy, representing the Jewish Federation of Greater Seattle, the Faith Action Network and other allied faith communities in support of HB 2461

I am here in support because the dictates of my faith and my conscience tell me that we must do what we can to try to curb the plague of gun violence in our country. As each day the number of deaths and injuries attributed to gun violence rise, the more this issue has become not only one of policy or rights, but of our failure to love our neighbor as ourselves.

Our rights as citizens have never been absolute. They must be balanced by individual responsibility and the collective obligation to protect each other from harm. And when there is a situation of proven risk, and we do not do what we can to mitigate that risk, then we have acted irresponsibly.

We all recognize that there are a host of factors that contribute to gun violence, and that there are other means of causing harm. But to not do something because we can’t do everything is, frankly, immoral. Extreme risk protection orders represent one important step, to limit access in order to limit injury. I urge your support.

And here is video

Truth
Shavuot: heavy on meaning, light on ritual.
Rabbi unboxing video. The rest is commentary, go and learn!
Who doesn’t?
This semester I had the honor of teaching the required course in Reconstructionism to students at @rrc_edu For the final the students needed to make a short video of their “elevator speech” on what Is Reconstructionism. I made a TikTok to go along with their presentations!
Happy Mothers Day! To my mom, who taught me how to bake, and my wife, the mother of our two boys, for whom I bake. And thinking of my MIL z”l , who was always complementary. Love to all those who mother.