One of the things I love about living where I do is that you can go out to the snow, and then leave it.

Earlier this week we were preparing for our annual trip to take in the snow. We go tubing, enjoy the change of scenery, take in the Bavarian kitsch of Leavenworth. This year, following the vandalism incident at my congregation, I was especially looking forward to a quick trip away.

While we were getting ready to go, we look on Facebook to see the following picture, labeled “Snoqualmie Pass”: 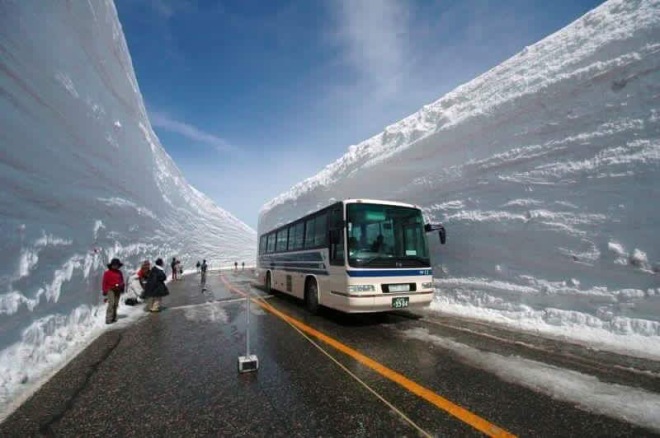 [For those not from these parts, Snoqualmie Pass is one of the main routes through the Cascade Mountains. During winter travel, one must be mindful of “the passes”—snow in the mountains can make the passes difficult to cross, and there is the potential they may be closed down. Drivers need to carry tire chains, and may be required to put them on in order to drive through.]

As compared to last year, we have had some welcome precipitation this winter. Rain down by sea level where we are usually means snow up in the mountains. So folks were welcoming the coming of snow, and marveling at the amounts.

Hence the picture. It was shared around Facebook many times, people commenting such as “wow!” or “This is near where I live!” I was amazed too at the photo at first, but then the more I looked at it, it seemed that something was off.

First, the sky, which seemed a little too blue for these parts, even when the sun is out. And the piles of snow seemed just too high; we had gotten snow, but not that much. And then the bus, a closer look and details began to stand out. The license plate had the shape of a foreign country, not the State of Washington or any other US plate. And it was on the opposite side of the road.

Sure enough, a Google search of “snow” and “highway” and maybe another search term or two I didn’t remember, revealed that the picture is not Snoqualmie Pass, but a highway in Japan that is known for its “snow canyon”-like atmosphere.

When we hit the pass, it was clear that the picture was definitely not of Snoqulamie Pass. But there was some truth to the photo—the snow was piled up on the side of the road like walls, about as tall as the car.

The number of people who shared the original picture, believing it was Snoqualmie Pass, was amusing to me. The original poster eventually wrote on Facebook that it was a deliberate joke, but prior to that a lot of people got taken in. At first blush it revealed the dangers of the Internet and social media—the tendency for fact checking is sometimes low, and the possibility to pass off fiction as fact is very high. Someone took a picture, put a description to it, and it was carried over the Internet. This could happen with pictures, with video, with articles.

But we can’t get away with anything, so why was this picture of a supposed Snoqualmie Pass believed so readily? As lifepartner Yohanna pointed out, the picture provided a version of the truth that people wanted to believe. Maybe it wasn’t actually Snoqualmie Pass, but the picture represented our image of what it might be, or what we experience it to be, or what we imagine it to be. That is just as real as the actual pass itself.

In the Torah reading this week, we begin the book of Exodus. We tell the story of the Israelite enslavement in Egypt, and the eventual rescue by the hand of Moses. It is a story of the plagues, of the confrontation with Pharaoh, the King of Egypt, and the dramatic crossing of the Red Sea into freedom.

Is this history? The story reads like history, it is a narrative that retells events as if historical. The question that has challenged biblical scholars is the veracity of the narrative—is this story truly historical? Did it happen? Is it fact or fiction?

Personally I don’t think the events really happened. But they are a story we tell, a version of events, that ring true to us. A story of oppression and liberation is a myth that speaks to our very core, and the story of Moses and the Exodus is a version of the truth that we believe because it reflects our outlook on reality. It doesn’t matter if it actually happened, the ideas behind the story are true.

The picture of the snow told a story, a version of events. Was it true? Was it actually Snoqualmie Pass? No. But it was a version of the truth—a truth in which snow was plentiful, a drought was ended, nature was awe-inspiring—that we can tell and retell. We shared it on the Internet not because we were falsely duped, but because we all recognized a piece of truth in it.

2 thoughts on “Why Did So Many People Think This Was A Picture of Snoqualmie Pass?”