This Shabbat we turned to the story of Noah, and small injustices.

The story of Noah and the flood is perhaps known to us. It is a story that is told to us as children and a story that is a part of the popular imagination. (And recently was a major motion picture.) God, dissatisfied with the world that was created, decides to destroy the world’s inhabitants by flood. Noah is chosen to be the savior of humanity (and animal life) when he is called by God and instructed to build an ark to house him and his family, along with representatives of all the world’s animal species. The floods come, Noah is saved, and once the waters subside all leave the ark to begin the world anew.

Its an extreme story, one that is also not exclusive to Jewish teachings. There is the Epic of Gilgamesh in ancient Mesopotamian literature, for example. There was perhaps some ancient catastrophic natural event that led different cultures to develop folklore of a flood story, a fact which makes the story that much more powerful because of its universality. But the key to reading and understanding this story is not to see it as a record of a worldwide catastrophe (although it is hard these days to read the story without thinking of sea level rise caused by global climate change), but to see it as a story of humanity. What are the values present in the story that we as humans are meant to understand? 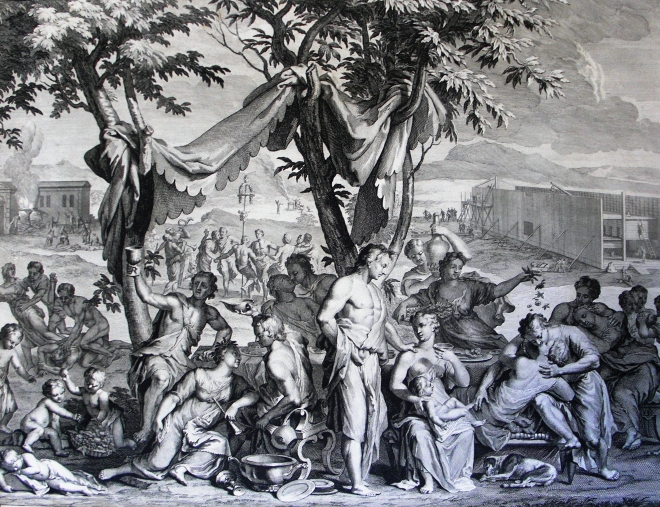 To think of that question, we turn to God’s reasoning. In the Torah story, the flood was not a random event, but a response. God was responding to the condition of humanity—a condition of evil, a condition of violence. “God saw how great was humanity’s wickedness on earth, and how every plan devised was nothing but evil all the time. And God regretted having created humans on earth, and God’s heart was saddened.” (Genesis 6:5-6)

But what, exactly, was the “wickedness” and “evil” that is spoken of? This story comes on the heels of the story of Creation, which ends with the first murder. So perhaps that murder and neglect for human life is what is being described. A midrash, however, comes to teach otherwise:

Each person only stole a small amount of beans, but when many people steal a small amount, then all the beans are gone. In other words, It was not the great injustices that led to the destruction of the world, but the small ones. A steady stream of small injustices build to such a crescendo that required a complete destruction and restarting of life on earth.

In recent days we have witnessed an increase in violence in Israel, with seemingly random attacks on Israeli civilians. What is striking to me is the “smallness” of these attacks. During the last intifada, when I lived in Jerusalem for a year as part of my rabbinical studies, the fear was bombings, which would kill numerous people at once. Now the attacks are that much smaller—stabbings in the street, cars driven into crowds. But the smaller attacks join into a larger wave of violence, which must be condemned.

These attacks are carried out in a context of the Israeli-Palestinian conflict and the general absence of peace, which is perhaps defined by many small injustices. As Israelis are attacked, we must not deny the small injustices that are carried out every day against Palestinians, who live under an ever-growing occupation, the constant threat and perpetration of violence, the need to negotiate checkpoints and who are generally not in control of their lives.

In our country, the idea of “small injustices” also relates to our conversations around race and privilege. While we note the wave of African American deaths at the hands of white police, we also need to take into account the small injustices faced every day by people of color, who are denied access, who are routinely stopped in their cars, who are watched in stores and who are perceived as a threat while walking down the street.

And as Jews in America we experience small injustices as well. Recently I was asked about the presence of anti-Semitism locally, and while I noted that we haven’t faced any major overt incidents recently, the scheduling conflicts, ignorance of Jewish calendars and customs, and indifference or hostility towards Jewish approaches remind us of our minority status and are just as wounding.

Many of the ills that plague us are defined by small injustices.

But while we speak of small injustices, we really know that small injustices, carried out by many, are both symptoms of and create great injustices. This is the lesson of the midrash on Noah. Small injustices aggregate, they condition societies to hate and hurt the other, they create societies that are, in the words of the Torah, “evil.” Another flood will not come to destroy humanity, that is God’s promise. But it doesn’t mean we aren’t capable of doing it ourselves.

As we read Noah this year, we take to heart the beginning of the story. We condemn the small injustices.

And we pray to avoid the Flood.