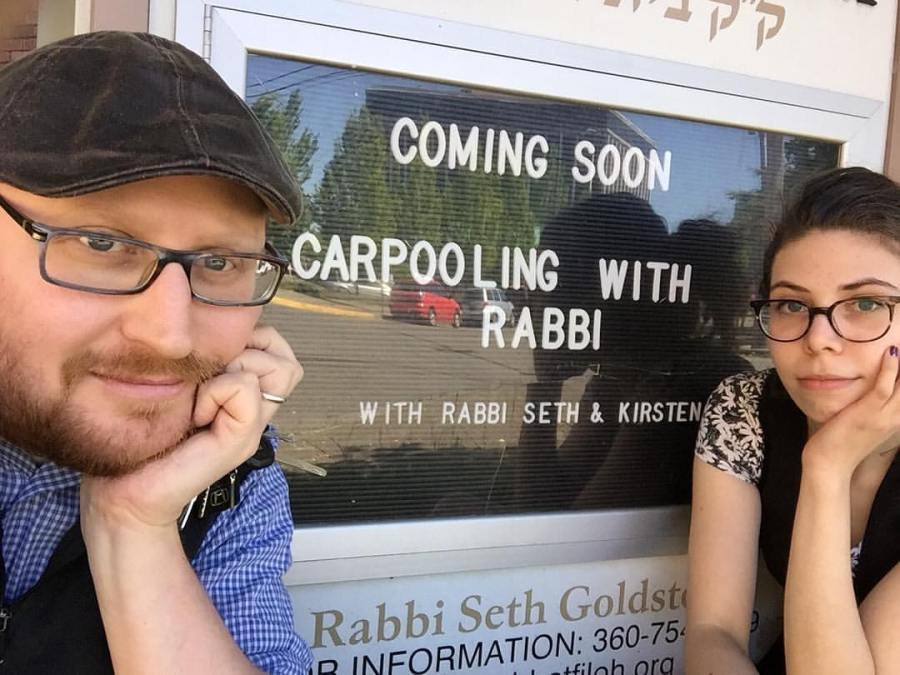 Welcome to our webseries.

When Kirsten was the Community Engagement Coordinator at my congregation, she lived just a few blocks from my son’s school. After I did the morning drop off I needed to pass by her house on the way to work. So I offered to give her a ride…

We had a great ride! While we have moved on to other things, we have 36 episode to watch and rewatch, each conversation continually relevant. Check them out below or on my YouTube channel.

You can binge watch Season 1 here:

And you can binge watch Season 2 here:

And you can binge watch season 3 here:

Rabbi and Kirsten discuss transitions, the lasting impacts of our actions, and what it means to say goodbye.

On the eve of Shavuot with one more episode left, Rabbi and Kirsten discuss setting life goals and how those goals can grow with them.

Rabbi and Kirsten (pronounced KER-sten) talk about the importance of names, the Jewish naming traditions, and how they’ve always longed for a personalized mug.

Rabbi gets into a fight with a blackberry bush which leads to a discussion about the wisdom in scars.

Rabbi and Kirsten discuss his new building project, the Omer, and how to handle setbacks when things don’t go according to plan.

How long can you wait before you Google the answer? Rabbi and Kirsten discuss the spiritual and cultural aspects of sitting with the unknown, and the nature of relationships, both online and off.

Two joys and a luck? Rabbi and Kirsten discuss the meaning of prayer and how prayer works in their lives.

Rabbi finds an old CD and reveals to Kirsten that he was once an extra in a music video, which prompts a conversation about what stays in the past and what we carry forward with us.

Rabbi and Kirsten talk about how to handle the things they’re avoiding and what to do at a 4-way stop.

From Rabbi Hillel to Hugh Prather, Rabbi and Kirsten discuss the importance of taking time for self.

Is punctuation really that important? Rabbi and Kirsten discuss the secret meaning of ellipses…and how the exclamation point is the new period.

Kirsten and Rabbi discuss what it means to be spiritual but not religious. And we may sing a little Alanis Morissette in the process.

Sometimes we need to let something go, in order for something new to take its place.

Can dreams tell the future? Or do we make them real? Kirsten and Rabbi talk about prophetic dreams. And whether or not the 5 second rule applies to milk.

On the eve of the 30th anniversary of his bar mitzvah, Rabbi reflects on his “rabbarmizvah”–his 13th year as a rabbi. It’s also laundry day!

After a discussion of “good” versus “bad” days, Rabbi and Kirsten discover that they are becoming more alike each day.

While Kirsten and Rabbi discuss the dangers of worrying about the future, Rabbi reveals a secret from his past.

Do you have Impostor’s Syndrome? Rabbi and Kirsten talk about accepting complements and how we often misunderstand what “humility” means.

What do you do when you start having a bad day? Rabbi and Kirsten talk about following-and ignoring-others’ advice.

Just in time for Yom Kippur, Kirsten and Rabbi take on forgiveness. (And continue their conversation from episode 13)

What is Yiddish for “FOMO”? Kirsten and I talk about her favorite story from the Torah.

Sometimes is more than about clothes. A planned trip to donate the Temple’s unclaimed lost and found–and the Rabbi’s “new” shirt–prompts a conversation on holding on and letting go.

Over the summer, Rabbi picks up Kirsten at the supermarket after she buys something for lunch, which prompts a conversation about the best and worst holiday, Yom Kippur.

It’s the end of our first season! Kirsten (“the giver”) and Rabbi (“the mediator”) talk about their new favorite personality quiz, the enneagram.

Kirsten’s WiFi goes down. The morning is off to a great start.

How do you get your best ideas? Kirsten and Rabbi talk about the nature of revelation and inspiration in their creative pursuits.

Rabbi shares a few of his “life hacks” and he and Kirsten talk about how it is sometimes the little things that make a big difference.

After an in-depth conversation about smoothies, it’s “the Torah as told by Kirsten.” Rabbi and Kirsten talk about the story of the spies from the week’s Torah portion.

It’s #FieldtripFriday as Kirsten and Rabbi make a run for supplies on the way to work and discuss self-care, secret snacks and a few hypotheticals.

Kirsten and Rabbi talk about something “heavy,” with references to Tarot, sitting shiva and the Facebook “like” button. (And some minor technical difficulties…)

Rabbi gets involved in an online political conversation, and Kirsten shows him the error of his ways.

Rabbi’s new haircut prompts Kirsten to tell him about her BFF, Siri, and talk about the importance of reminders.

Kirsten brings up “He Who Shall Not Be Named” for an early morning theology conversation.

After a pitstop on the way to the office to pick up the newspaper, Kirsten learns a little yiddish and shares about giving up social media as a spiritual practice.

On our first ride together, Rabbi shares about a dream about work after he and Kirsten agree about the importance of hydration.