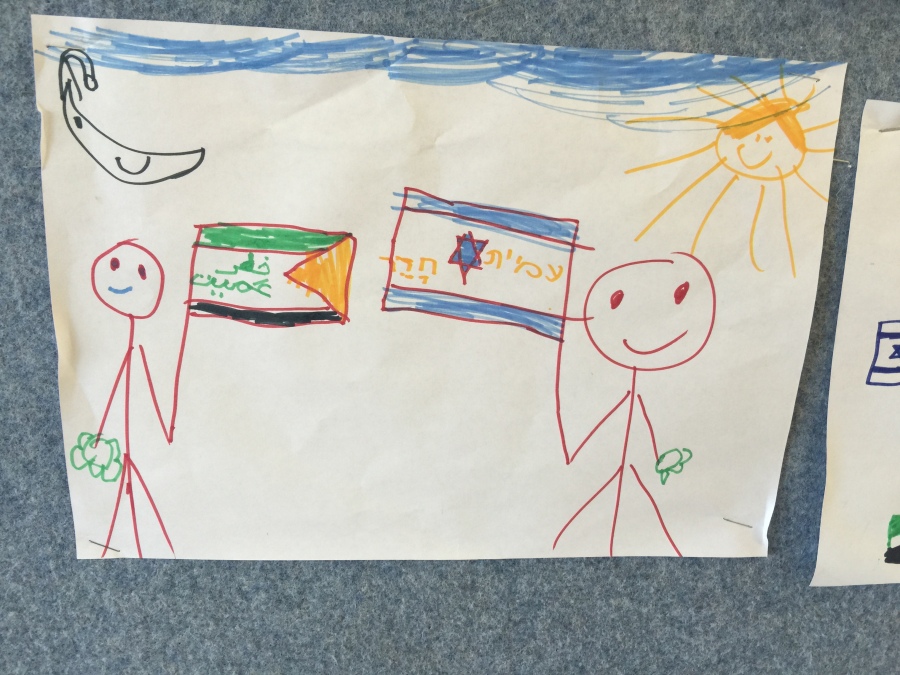 Those of you on Facebook understand Facebook memories, when the social media site selects a posting from the past to remind you of what you posted on that day in years past. Recently Facebook has been reminding me of my trip to Israel l took a year ago at this time.

It was a trip to Israel unlike one I had taken before. It was focused on peace building efforts as our interfaith group met with a host of organizations and individuals who are building bridges to peace, connecting Israelis and Palestinians. It was also my first trip into the Palestinian West Bank as our tour took us to Ramallah and Bethlehem. And then, after the formal tour had ended, I stayed in Israel an extra week to visit family and friends and do my own touring. As part of this time I had the privilege of spending a day with Rabbi Arik Ascherman of Rabbis for Human Rights as he did field work in the West Bank.

This experience was life changing as I began to understand things in a new way. There is nothing that compared to bearing eyewitness, and the ability to both see on the ground peace efforts as well as the day to day lived experience of Palestinians was powerful to see first hand.

On that trip we visited a Yad B’Yad (Hand in Hand) school in Jerusalem, a school that is for both Jewish and Arab children. Unlike other schools that are segregated, this school brings together students of different backgrounds to learn with and from each other. It was also firebombed a few months before we visited, a testament to the fear and hatred that comes from forward movement.

It is an enterprise not without its challenges, as was described by our guide. And one challenge comes around this time of year, when the Israeli national holidays are not observed in the same way by the Arab Palestinian population. For while some celebrate Yom Ha’atzmaut, others call it the Nakba—or “catastrophe.” The school administration is charged with holding both narratives at the same time, and honoring and understanding them both. A recent article talked about this.

And this must be our charge as well. As Jews living outside Israel, who have been brought up with a particular story and narrative as to the creation and continuation of the state of Israel and its place within world Jewry, we must be able to recognize that there are multiple narratives surrounding this day. That victory oftentimes creates victims, and that the story of Israel does not just involve one people, but multiple peoples.

And as we celebrate the achievement that is Israel itself and all that the country has attained, we as American Jews can not deny the fact that Israel currently is oppressing and controlling another population, and that this reckoning has practical and moral implications for the Jewish people and for the future of the State of Israel.

This is what I am wrestling with this Yom Ha’atzmaut. Two things that came across my desk recently, in addition to the article about the Yad B’Yad school, are giving me hope for forward movement.

One was about the Israeli-Palestinian Memorial Ceremony held for the past 11 years by the Combatants for Peace Movement in cooperation with the Parents’ Circle – Bereaved Families Forum. This joint ceremony mourns all loss created by ongoing conflict. As an Israeli journalist wrote in the Forward about her experience:

…by taking the risk and attending this ceremony at last, I made a commitment: to remember and to hope, to feel the pain and to look to the future, to celebrate Independence Day while recalling the Nakba and trying to build a better society. To mourn the dead, but never to value them more than the living.

The other came out of my alma mater, Wesleyan University, where the Jewish student organization hosted a panel with representatives from across the political spectrum–including those shunned by “mainstream” Jewish community–to talk about Israel/Palestine. For our other challenge as American Jews is to be continually open to who is in our tent, and to listen to all the voices being expressed from among our ranks. Excluding voices present within Jewish community can come with risk, and I am not sure that it is one we want to take. Litmus tests can be dangerous things.

[And as an American liberal rabbi, I am also concerned when one’s Jewish identity is solely focused around Israel at the expense of the rich spiritual and textual tradition we have inherited.]

There is much to read and think about and discuss when it comes to Israel. I value the place as a Jewish cultural center, a repository for Jewish history, a crossroads of diverse Jewish community and a home to members of my family. (Facebook also reminded me that today is the birthday of Yohanna’s twin cousins). We must look to a time when we can truly create a nation that lives up to its expressed ideals in its Declaration of Independence:

it will foster the development of the country for the benefit of all its inhabitants; it will be based on freedom, justice and peace as envisaged by the prophets of Israel; it will ensure complete equality of social and political rights to all its inhabitants irrespective of religion, race or sex; it will guarantee freedom of religion, conscience, language, education and culture; it will safeguard the Holy Places of all religions; and it will be faithful to the principles of the Charter of the United Nations.

The title of this post is from the poet Yehuda Amichai, whose last collection of poems before his death was called Open Closed Open. Amichai is one of my favorite poets and I think about his work often. In honor of this day, I offer this selection from his work:

I believe with perfect faith that at this very moment
millions of human beings are standing at crossroads
and intersections, in jungles and deserts,
showing each other where to turn, what the right way is,
which direction. They explain exactly where to go,
what is the quickest way to get there, when to stop
and ask again. There, over there. The second
turnoff, not the first, and from there left or right,
near the white house, by the oak tree.
They explain with excited voices, with a wave of the hand
and a nod of the head: There, over there, not that there, the other there,
as in some ancient rite. This too is a new religion.
I believe with perfect faith that at this very moment.

Open Closed Open. If we are open, not closed, to one another, then we are open to a new future. We can point to what the right way is.