By the end of the day Saturday, my Facebook feed was filled with people who had attended the Washington State Democratic caucuses. The emotions were high—people praising democracy in action, and sharing the excitement of cramming into school gymnasiums with neighbors and friends to debate, discuss and decide on who should be the Democratic nominee for President of the United States.

Not me. I wasn’t at the caucus. I was at my synagogue leading a smaller-than-usual crowd in our monthly Talmud study group. For the caucus was on Shabbat, the Jewish sacred day of rest. 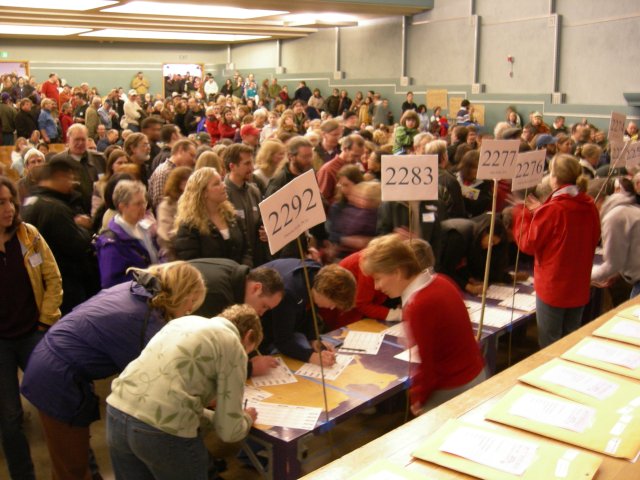 I was trained in the Reconstructionist movement, and identify with the liberal/progressive end of the Jewish spectrum. And by liberal/progressive I do not mean politically, but regarding theology and praxis. I value the dictum of Rabbi Mordecai Kaplan who taught “the past has a vote, but not a veto,” meaning that while Jewish tradition informs us, it is not the final say. Halacha (“Jewish law”) is taken more as a guide than as a determinate set of edicts.

This admittingly is not easy. It means weighing traditional practices and contemporary mores. It means examining values and desires and trying to do what is meaningful. And while tradition does not have the final say in how we determine our Jewish lives, it does not mean we completely ignore it either.

Kaplan also taught that we live in multiple civilizations, and that we recognize the multiple sets of values which form our identities. As Jews and as Americans, we honor both identities (and others as well.) But sometimes, those identities can come into conflict.

Like this past Saturday. The Washington Democratic Caucus was scheduled on Shabbat, a day that I as a rabbi and practicing Jew value and hold sacred. A day that as a Jewish community, we set aside for communal worship and study. A day that we are meant to take ourselves out of our daily lives, do things differently and focus on rest and renewal.

Now, because I approach Judaism from a more liberal perspective, I don’t observe Shabbat in the most traditional sense. I cook, I use electricity, I go places, etc. But I do so in a way that allows me to honor the spirit of the day. And I—and my congregational community—have set aside Shabbat morning (roughly between 9:00 a.m. and 1:00 p.m.) as our time for communal gathering, study, prayer and reflection. So granted, if the caucuses had been in the afternoon, I probably would have gone. I would not have felt a conflict, and would have felt I could honor Shabbat and my American civic obligations at the same time. But they were scheduled for the morning, so my priority was to honor the commitment to myself and my congregation to be present at the synagogue.

I was frustrated that I did not get to attend. I highly value civic engagement and the political process, and I am especially fond of the caucus system. I did participate, however: I had filled out an affidavit, which the state Democratic party allows one to do if one has a conflict and is unable to be present. The conflicts must fall under a specific reason including work requirements, military obligations or, as in my case, religious commitments.

Yet while my voice was included, my participation was excluded. In short, I missed out on the experience because my religious practice as a Jew is not normative, but rather something that must be accommodated.

In our conversations on race which have dominated much of our civic discourse over the past year, we have talked a lot about white privilege. How white people—myself included—have various advantages by virtue of being white, and that part of coming to terms with racism is to recognize and acknowledge our privilege, which can benefit us in numerous ways.

At the same time, we need to remember that there multiple types of privilege, and one of those is religious privilege. Our civil society is based around a Christian calendar and assumptions that leaves Judaism and other non-Christian faiths outside the norm.

This lack of privilege can be expressed in a variety of ways. For Jews and others, it means not seeing our holidays represented in stores, in media and in other public expressions; having to worry about missing school or work to observe our holidays, and sometimes facing hostility for doing so; or having a major civic engagement, like a caucus, scheduled for our holy day/Sabbath (to name a few). If you don’t share these concerns, you benefit from Christian privilege. (And you don’t have to be religious to benefit—one can understand this privilege as “culturally Christian.”)

I don’t expect much to change; Jews are a minority in this country (and even more so in Washington State and Olympia), and I recognize that. I know many of my Jewish friends, colleagues and congregants chose to go to the caucuses, and I respect that choice. But that is exactly the point: for Jews, it will always have to be a choice. And that is what sometimes makes me frustrated.